Having built up turnkey project references in ITS and weighing systems, KINEO can now offer a competitive proposal for the Middle East and North Africa market.

GULFTRAFFIC is the leading event in traffic engineering in the Middle East and neighbouring areas such as North Africa and parts of Asia near the Persian Gulf. It is held from 4th-6th December in Dubai. KINEO installed traffic meters in India in 2013 and also in Kuwait, together with high-speed weighing systems in 2016. In all, almost 250 turnkey lanes.

Our proposal at GULFTRAFFIC is aimed at end customers and integrators who work in these markets and need a reliable supplier for these highly specific ITS systems in which installation and customisation are as important as the devices or sensors themselves. KINEO offers a highly specialised proposal with almost two dozen turnkey projects in Europe, South America and Asia. We also seek contacts with consultancy firms that need our experience in designing their projects, especially those that include weighing systems. 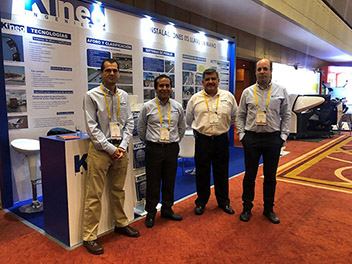