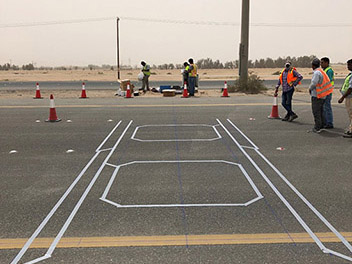 KINEO is ending the year with several projects under way in Latin America that will strengthen our international position, especially in the field of weighing systems for transport inspection.

In Mexico we are installing a network of traffic meters in Circuito Mexiquense based on intrusive loop-loop sensors, with an optional upgrade to piezoelectric sensors whenever a higher level of classifications that require physical detection of axles is needed. The installation consists of 7 DCSs and 30 lanes, and includes adaptation of the system to the classification table in force in Mexico’s transport system. The customer is ALEATICA MEXICO and the concessionaire is part of OHL group.

In Colombia, together with ETRA ANDINA and with DEBISAB as the end customer, we are to install new pre-classification systems associated with two of its weighing stations on the outskirts of Bogotá in early January. The technology to be implemented is high speed weigh-in-motion (HSWIM) with A5 precision, number plate reading in each lane and FULL LED information panels to warn pre-classified vehicles about their obligation to enter the measurement scales. In all, there are 2 sites, the first one with 2 HSWIM lanes integrated in a toll system, and the second one with 1 HSWIM lane and 2 classification lanes for detection of weight control evaders, as well as number plate detection.

Finally, also in Mexico, we will be installing 3 HSWIM high speed weigh-in-motion sites (16 lanes in total) for the PROSIS-ALDESA-ACTICA group as part of its contract with CAPUFE (SCT Mexico). All lanes will have number plate reading and context image capture capabilities, and the entire solution will be solar powered.